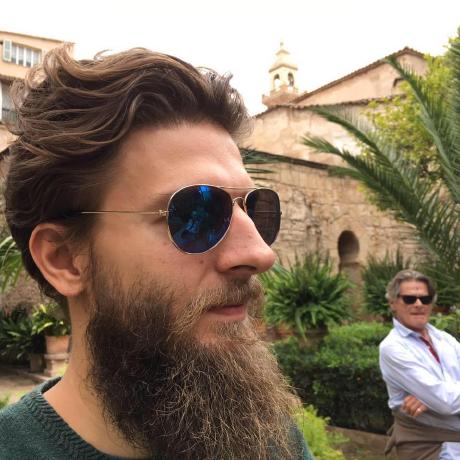 A Vim plugin that shows the context of the currently visible buffer contents. It's supposed to work on a wide range of file types, but is probably most useful when looking at source code files. In most programming languages this context will show you which function you're looking at, and within that function which loops or conditions are surrounding the visible code.

Here's an animation which shows it in action. See below for an explanation.

Do you ever find yourself looking at code with long functions or deeply nested loops and conditions? Do you ever lose your place and start scrolling in your buffer to see where you are? This plugin aims to always show you that context for your currently active buffer so you always know your place.

Here's an screenshot showing parts of eval.c in the Vim source code:

At the bottom you see the actual buffer. At the top you see a popup window used by context.vim to show the context of that code. So here we are looking at some code within the echo_string function. And within that function we are currently handling the case where tv->v_type is VAR_LIST and so on.

In the animation above you can see how the context changes as we scroll through this function.

This plugin should work out of the box for most file types. It's based on indentation and some regular expressions.

Below is an illustration of how it works: Start at the grey box in the bottom left corner. It shows the original visible buffer content as you would see it without this plugin. Above the box we can see what's usually hidden, the file contents above the visible area. You'd need to scroll up to see it.

This plugin scans upwards through these hidden lines to collect the context. Every time it hits a line with a lower indentation than the last one it will add it to the context. There is also some logic to add lines with same indentation to the context in some cases. For example it adds the else line which belongs to the first { and also the else if and if lines. So you know exactly what this else case is about. All lines which are part of the context in this example are displayed with color while the remaining lines are greyed out.

In the top right corner we see again all these lines which make up the context. Below is a condensed version where some lines were joined. We show ellipsis (···) between the joined parts if there was text between them in the original buffer. So this tells you that there was code within the else if block, but not between the else if condition and the { line below it.

In the bottom right corner we see the final result: The context is displayed in a preview window above the original buffer. 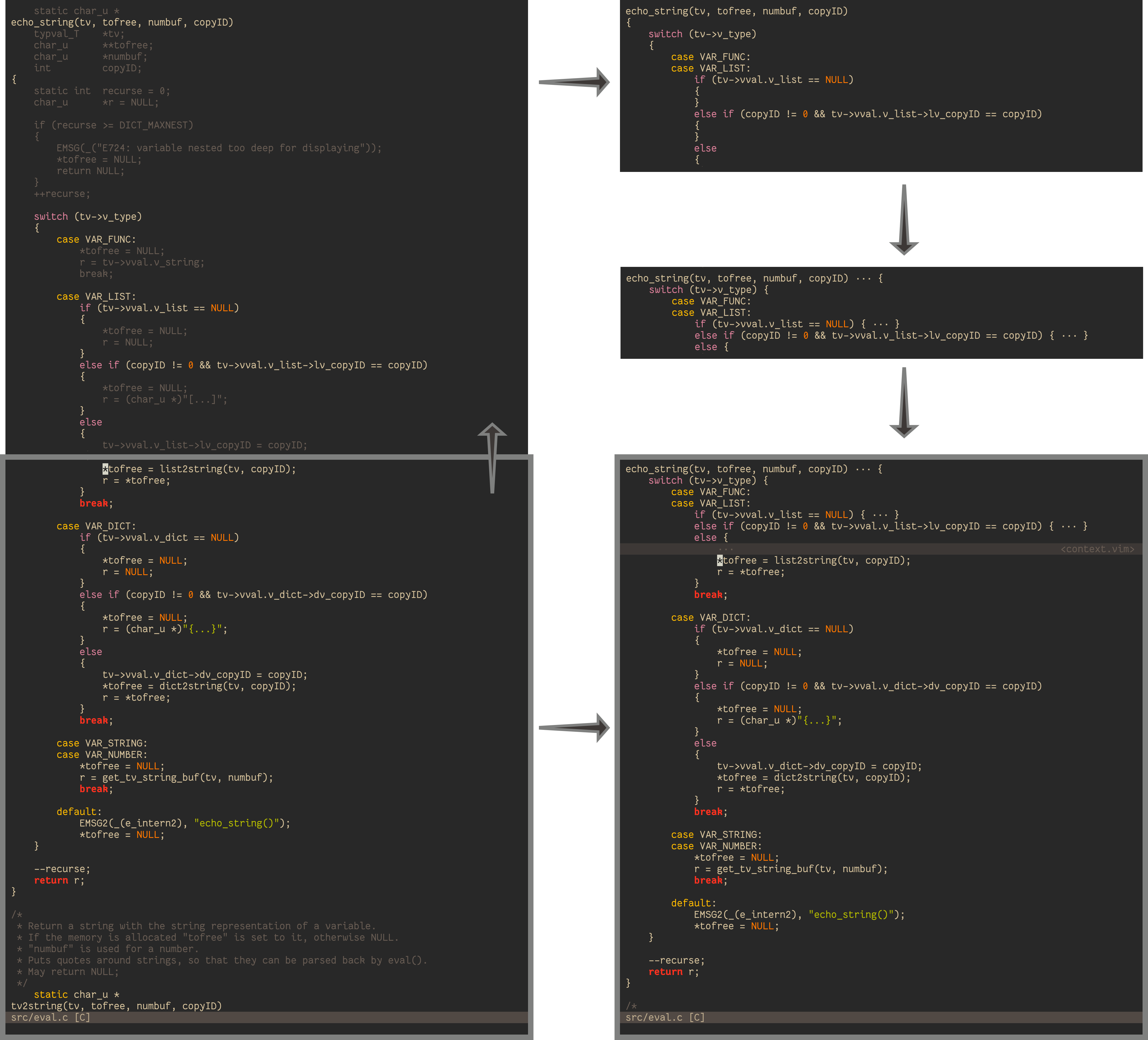 This plugin is supposed to work out of the box. But there are some variables which can be set to different values to tweak the behavior. Below we show each of those together with their default value for reference. Copy/paste these lines to your vimrc and change the values to your liking.

If you feel like one of these default settings are bad in some way or could be improved to create more useful contexts in some file types, please open an issue and let me know. Also if you feel like any of these settings would need to be settable on a per buffer/per file type basis.

This plugin is enabled by default. Set this variable to 0 to disable it. You can then use :ContextEnable or :ContextToggle to enable it on demand.

By default, no filetypes will be ignored for the context buffer to appear. If you wish to blacklist a specific filetype, add the name of the filetype to this list.

By default we create some mappings to update the context on all Vim commands which scroll the buffer. Set this variable to 0 to disable that. See below on how to customize these mappings if needed.

Note: Ideally there would be an auto command event for when the buffer had scrolled, but unfortunately that doesn't exist. vim#776

By default we set up some auto commands to update the context every time the buffer might have scrolled. Most notably on CursorMoved. Set this variable to 0 to disable that. See below on how to customize these auto commands if needed.

This variable can be used to control how the context is presented. The default logic works like this: If you're running a Neovim version which supports floating windows, use them ('nvim-float'). If you're running a Vim version which supports popup windows, use them ('vim-popup'). Otherwise use a preview window ('preview'). So for example you could force the usage of preview windows by setting g:context_presenter to 'preview'. It is recommended to stick to the default though (by not setting this variable) as floating/popup windows should lead to the best experience.

If the context gets bigger than 21 lines, it will only show the first ten, then one line with ellipsis (···) and then the last ten context lines.

If we extend the context on some indent and collect more than five lines, it will only show the first two, ellipsis (···) and then the last two.

Note: This is likely to happen if you have many else if conditions or many case statements within a switch.

If we extend the context on some indent we try to join them. By default we join a context line into the previous line of same indent if the former has no word characters. For example in C-style indentation we would join the { line to the if (condition) line. So in the context it would show up as if (condition) {.

In complex cases there can be a big number of such context lines which we will join together. By default we only show up to 5 such parts.

By default we use this character (digraph .M) in our ellipsis (···). Change this variable if this character doesn't work for you or if you don't like it.

If your Vim/Neovim version supports popup/floating windows we draw a line to separate the context from your buffer context. This character is used to do that.

If your Vim/Neovim version supports popup/floating windows we use these highlight groups for the popup window (normal), the border line (border) and the "tag" (<context.vim> at the end of the border line) (tag). By default the popup window uses the same background color as your buffer. For example you could change that to make it more visually distinct by setting g:context_highlight_normal to 'PMenu'.

If you use Vim you can define your own highlight group like highlight MyColor ctermbg=lightblue and set g:context_highlight_normal to 'MyColor'. In Neovim this is currently not supported (see :h 'winhl').

If a buffer line matches this regular expression then it will be fully ignored for context building. By default we skip empty lines, comments and C preprocessor statements.

If a buffer line matches this regular expression, context.vim will extend the context on the current indentation level. So instead of searching upwards for the first line of smaller indent, it will also look for lines with the same indent. For example if we find an else or else if line, we will look upwards for other else if or the initial if line. That way all these conditions will be part of the context so it's more clear of what the current case actually is about. Also by default we extend if the current line starts with any square bracket or curly brace. So for example in a C-style if condition we would extend the { line to include the if line.

If we extended the context on some indent, we will join a line of this indent into the one above if the lower one matches this regular expression. So back in the C-style case where our context contains an if (condition) line and a { line below, they will be merged to if (condition) {. And that is because the { line matched this regular expression. By default we join everything which has no word characters.

The function takes a line number and is supposed to return a number which you could consider a virtual indent. Smaller indent number means bigger scope, just like indentation. Make sure to return -1 if an invalid line number gets passed in, like indent() does.

Here's an example that considers Markdown headers for the context: #45 (Note that you need to change g:context_skip_regex too to make this work)

When using popup windows we indent the border line to be aligned with the context base line. You can use this setting to use a different function to control that indent. Similar to g:Context_indent this function also takes a line number and returns an indentation number. For example you can disable that indentation at all to always show a full width border line like this: let g:Context_border_indent = { -> 0 }

There's an issue in Neovim which leads to some artefacts. To avoid those we manually refresh the screen after every context update. This can lead to screen flickering, see #23. You disable those redraws (at the cost of visual artefacts) like this: let g:context_nvim_no_redraw = 0

By default they shouldn't be needed, but some command are made available for your customization needs:

If you disabled auto commands (see below) you need to activate this plugin by executing this command. By default it's called on the VimEnter auto command.

If you let g:context_enabled = 0 to disable it by default or have disabled it with one of the commands below you can use this command to enable it.

Use this command to disable the plugin. This also hides the context window. Use :ContextEnable to enable it again later.

Use this command to toggle between enabling and disabling this plugin. This is useful in mappings.

Similar to :ContextEnable, but only affects the current window.

Similar to :ContextDisable, but only affects the current window.

Similar to :ContextToggle, but only affects the current window.

Use this command to temporarily show the current context, but hide it again on the next cursor movement.

If you disabled auto commands (see below) the context won't be updated automatically. Use this command to update it manually.

This plugin uses auto command to update the context automatically. You can disable that by setting g:context_add_autocmds to 0.

If you want to set up your own auto commands, here are the default ones for reference:

Note the VimEnter one. When Vim starts this plugin isn't active yet, even if enabled. That is because there are some issues with trying to open a preview window before Vim finished opening all windows for the provided file arguments. So if you disable auto commands you will need to call :ContextActivate in some way to activate this plugin.

Unfortunately there's no auto command for when the buffer has scrolled vim#776. As the next best thing we add a few mappings for commands which scroll the buffer. So whenever one of these commands get used, we call a function to update the context. You can disable that by setting g:context_add_mappings to 0.

If you want to create your own mappings, here are the default ones for reference:

Note how zz, zt, and zb get called twice in the mapping before updating the context. This is because otherwise there are some cases where they don't work as expected.

Please feel free to open an issue or pull request if there's anything which you'd like to see improved or added to this plugin.

If you made a change to the regex settings and feel like it might be generally useful, please let me know so I can consider updating the defaults.